I love Schwarzwälder Kirschtorte, or Black Forest Cake as its known here in the States. But if I’m being honest I don’t always love making it. Mostly because frosting with whipped cream is one of my least favorite ways to frost a cake. It never seems to turn out right for me, and its so hard to keep them looking perfect  – especially if you have to take it with you anywhere. 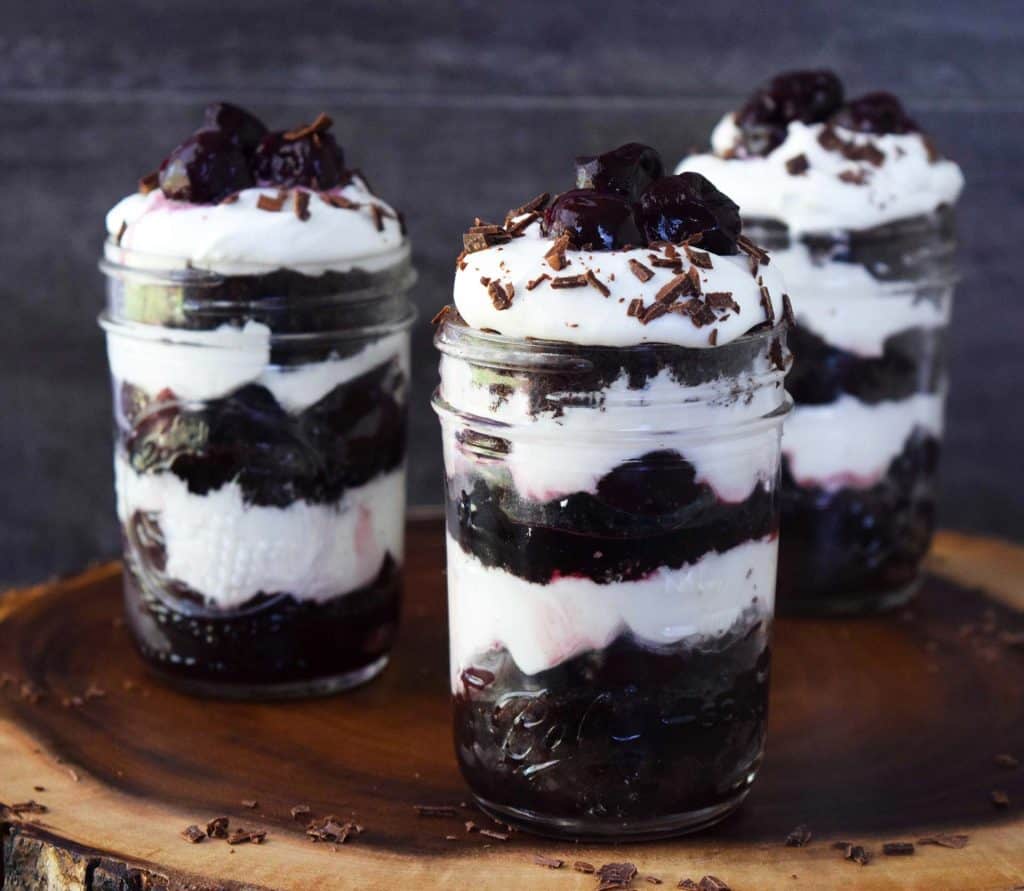 So while playing around one day in the kitchen, I came up with this solution – Black Forest Cake in a jar. It has all of the typical ingredients (even the Kirschwasser!) but in a more convenient package. And it still looks pretty!

I also love that these come prepackaged in individual portions. If you want the adults to have kirschwasser on their cake, but skip it for the kids – you can have it both ways! Someone want more cherries and less whipped cream? They’ve got it.  Can you tell I have some picky eaters in my family?

All right… so getting down to making this, know that I used boxed cake mix. I know some out there are probably clutching their pearls, and you could easily make your own chocolate cake mix from scratch, but since the rest of the recipe has a few layers I wanted to keep this part simple. So, if you prefer to make it from scratch – you definitely can!

Cook chocolate cake mix according to directions. Use a large sheet pan or 2 9 inch circular pans to cook cake in. You want cake to be about ¾ inch thick. If you cook in a deeper pan, you may want to slice cake in half.

Once cake has cooled, use lids of jars like cookie cutters to cut out 24 circles. Set aside.

Put cherries, ½ cup sugar and ½ cup kirschwasser in a pot over low simmer for about 10 minutes, depending on your stove. You want cherries to warm and the sugar, juice and kirschwasser to combine into syrup but you don’t want the cherries to disintegrate or become too mushy.  Keep an eye on it and stir occasionally.

Grab all of your ingredients and create an assembly line. Take one jar, add one circle of chocolate cake. Drizzle a teaspoon of kirschwasser over the cake, add cherries, whipped cream. Then repeat with second circle of cake, kirschwasser, cherries and whipped cream. Top with shaved chocolate and a few cherries as garnish if desired.  Repeat until you’ve filled all your mason jars.  Serve immediately.

These cakes can be kept overnight in the fridge, or can be frozen. To freeze, cover top with freezer wrap before placing lid on top.

Mirthmade is a participant in the Amazon Services LLC Associates Program, an affiliate advertising program designed to provide a means for us to earn fees by linking to Amazon.com and affiliated sites